I was a freshman in college.  And, in order to attempt making small talk, I’d just asked a Protestant student from one of my English classes—whose favorite topic was talking about his church—if he was doing anything for Ash Wednesday.  He stared at me as if I’d just asked him what he was doing for Chocolate Moon Day.

“It’s the first day of the season of Lent,” I said, trying to jog his memory.

“What’s Lent?” He blinked at me looking confused.  Guess there was nothing to jog.

“Well, it’s when some church-going folks set aside special time for God.  Sort of like Advent during the holidays—when people read a section of the Bible and light a candle.  Lent is a reflective, thoughtful time, so some people will sometimes fast or give something up in order to focus.”

Looking skeptical, he asked what kind of church I went to.  At the time I was identifying as a displaced Presbyterian and I was somewhat irregularly crashing at a local Lutheran church while I figured things out.

“Lutheran?”  He questioned.  The word sounded foreign to him as the syllables left his mouth.  “Is it a Protestant church?”

He just blinked at me.

“Martin Luther … as in the Reformation?”

“Martin Luther, huh?  Are you sure you’re not a Catholic?”  He looked at me suspiciously.

“Well, I’m not really a Lutheran …. but, yes, I’m sure Lutherans aren’t Catholics.  Lutherans broke off from the Catholic Church during the Reformation.”

“Really, they’re not Catholics, Lutherans were the very first Protestants.”

“Well, I’ve never heard of them before.”  He said still looked highly skeptical, but commented how it was “interesting” and that he’d never heard any of the stuff about Lent or Luther before.  He self-identified as being Protestant and he’d never heard of the Reformation or Martin Luther?  I invited him to attend the Ash Wednesday service with me, but he was playing Frisbee with his church youth group and that took precedence.

I thought my classmate and I had finally made some headway, but the next time I ran into him at school he asked: “So, Kelsey, how’s Lent going?  Hey, what religion did you say you were again?” 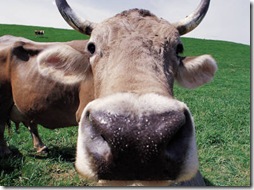 Paper snowflakes and candy canes hung from the ceiling, the windows were now the stage for two-dimensional holiday scenes, and a small, wooden nativity sat in a corner. It was just about as festive and tacky as a four-year-old Sunday school classroom can be in the middle of December … and the kids loved it.

The majority of my small class played with the wooden nativity scene as they acted out the Christmas story with some minor artistic licensing unless, of course, there was a Lego© family and a T-Rex present at Jesus’ birth.

“Teacher, do cows eat this stuff?” asked Nate, a cute little boy who was playing with a black and white dairy cow, holding up a few pieces of hay in his chubby hand. I answered in the affirmative, so the plastic cow continued munching away on the hay in the feeding trough where the little wooden baby Jesus was sleeping.

As Nate looked down at the toy bovine towering over the manger, panic suddenly shot through his whole body like a bold of electricity. He dropped the dairy cow as if he was holding a smoking gun. “Uh, Teacher?” he asked in a shaky voice. “Was .. uh … baby Jesus eaten by a … uh … cow?”

END_OF_DOCUMENT_TOKEN_TO_BE_REPLACED

“I traded lots of dreams for a bigger paycheck,” Mitch Albom confesses in his book Tuesdays with Morrie, “and I never even realized I was doing it” (Albom 33).

Like many young Americans Mitch had dreamed of freedom, adventure, traveling, but had slowly traded each and every one of them in the pursuit of success as our culture defines it—more zeros on a paycheck, a house big enough to drive your neighbors mad, and an important and respected position within his line of work.  How horrible it must be to realize years later that your life isn’t what you’d wanted because you cashed in your dreams.

END_OF_DOCUMENT_TOKEN_TO_BE_REPLACED

The reference to Eve in Genesis as a “helper” is one of those tricky Bible verses—confusing and often misunderstood. And, sadly, it’s even been used to justify women being treated as personal servants or doormats.

Biblical scholar and professor, Gilbert Bilezikian, says in his Book Beyond Sex Roles: What the Bible Says About a Women’s Place in Church and Family that “In the past, uninformed teachers of the Bible seized on the word helper to draw inference of authority/subjection distinctions between men and women.  According to them, helper meant that man was boss and woman his domestic.”

Thankfully, though, professor Bilezikian says that careful study of the word helper has “dispelled such misconceptions” because “this Hebrew word for ‘helper’ is not used in the Bible with reference to a subordinate person such as a servant or an underling” (Bilezikian 22). Instead of showing weakness, the word “helper” in this context actually highlights strength.

This Hebrew word for “helper” in the Bible “is generally attributed to God himself when he engages in activities of relief or rescue among his people.  Consequently, the world helper may not be used to draw inferences about subordinate female roles. If anything, the word points to the inadequacy and the helplessness of the man when he was bereft of the woman in Eden” (Bilezikian 22).  Isn’t that interesting?  It’s the same word used to describe God and no one would make the assumption that God was subordinated by his people because he helps them.  The fact God helps illustrates his strength and compassion.

Eve to the Rescue:

By himself Adam wasn’t able to fully reflect God because he was lacking in community. God intended to create people … not just one … for relationships/community. As a result, the fact that Adam was alone was even deemed “not good.”  So God provided Adam “with a ‘rescuer’ to become with him the community that God had intended to create all along” (Bilezikian 22).  Eve wasn’t a second thought, creating community was the plan all along.

Due to the strength of this word, Bilezikian says that “To wrench the word helper from this precise context, where it has the strength of rescuer, and to invest it with connotations of domesticity or female subservience violates the intent of the biblical text” (Bilezikian 22).

It’s funny how “rescuer” sounds more like a firefighter, brave soldier, or a superhero.  But the word “helper,” even though it could mean rescuing someone, tends to be associated with things like personal assistant or maid.  Perhaps in order to more effectively communicate the original intent of the passage, it’d be better if the word was translated “rescuer” or I’ve heard others suggest “lifesaver.”

Other Articles of Interest:

A couple of pages into Dating Jesus: A Story of Fundamentalism, Feminism, and the American Girl and I was already in love with Susan Campbell’s witty, raw, and often wry writing voice.  The style of this book really intrigues me—creative nonfiction, a bit of research thrown in for good measure, and it’s written in present tense.

The book chronicles Campbell’s spiritual and ideological journey.  She was raised in a fundamentalist Christian church and saw sexism in both her church and community at large, which profoundly impacted her as a girl.  “I love Jesus,” Campbell writes, “but if all believers are urged to stay on the straight and narrow, there seems to be an especially narrow road built for women” (Campbell 64).